"This is as far as you go!"
― Birdo, Super Mario Advance

Birdo (キャサリン ,lit. Catherine?), self-referred to as Birdetta and the shorthand Birdie, is a recurring character in the Mario series. She first appeared in Yume Kōjō: Doki Doki Panic (夢工場 ドキドキパニック), a Japanese game featuring Birdo as the first boss. After its release in Japan, Nintendo of America remade it, featuring Mario characters, but kept the enemies and bosses the same. This remake was known to be Super Mario Bros. 2.

Birdo later appeared in many Mario spin-offs like Mario Tennis and Mario Kart. She is voiced by Kazumi Totaka.

Birdo appeared in Super Smash Bros. Melee for the GameCube as a cameo, Mario Superstar Baseball and Super Mario Strikers as Yoshi's teammate, Mario Kart: Double Dash!! as Yoshi's partner, and Mario Party 7 as an unlockable character. Birdo can be unlocked in the game by purchasing her in the Duty-Free Shop.

For the Wii, Birdo was in Mario Party 8, Mario Strikers Charged as Yoshi's teammate, Mario Kart Wii as an unlockable character, and Mario Super Sluggers.

Mario and Sonic at the Olympic Winter Games DS

Birdo makes an appearance in Mario and Sonic at the Olympic Winter Games as a non-playable character. Appearing in the level known as Cubyrinth, she agrees to give Yoshi his Drift Board if he proves he is a Top Athlete.

Birdo appears as a playable character in both Mario Kart: Double Dash!! and Mario Kart Wii. In Mario Kart: Double Dash!! she is Yoshi's default partner, and after unlocking the second wallpaper, Birdo is paired up with Peach. Her special item is the Birdo Egg and his unlockable kart is the Turbo Birdo, which has average speed and acceleration, but with above average weight. In the Dry Dry Desert track, her emblem appears many times. The Staff Ghost uses Birdo and Yoshi in the Turbo Yoshi kart in both the Dry Dry Desert track and the Yoshi Circuit track. Also Yoshi Circuit as background cameo appeared in Mario Kart DS.

In Mario Kart Wii, Birdo appears as an unlockable, middleweight character. She has an equal balance of weight, acceleration, and top speed. However, her off-road statistics are quite poor. She is unlocked once the player defeats 250 players in online racing, or when sixteen Time Trials are done on different courses. Much like in Mario Kart: Double Dash!! her emblem appears in the Dry Dry Ruins track. Aside from the Miis, Birdo is the only playable character that is not used as a staff ghost.

Birdo becomes playable for the first time in the Mario Party Series, as an unlockable character in Mario Party 7. She will become playable when he is purchased at the Duty Free Shop for 1,000 mileage points. Birdo is one of the two new characters, along with Dry Bones. In the Mario Party installments, Birdo's emblem is her red bow. Also, she always wears a very elegant diamond ring on her finger, when Birdo gets a star, she shows off this ring during one of her poses. Her default partner is Yoshi on the Team Mode and they both are the only characters who could use the special item:Egg Orb; Its effect is that as the player went take their turn, they suck up (or eat if Yoshi) any Character Spaces that they crossed. When their turn was done, the spaces were turned into orbs that he could use. It have the same as his counterpart, Yoshi's Egg Orb, differing only in that they are covered in pink spots.

Birdo and her friends are invited to the Star Carnival, where she appears as a playable character from the start. This is her second Mario Party game, and her default partner is Yoshi. When Birdo emerges victorious from the Star Battle, she is crowned the Superstar and wins a year's worth of candy. Also, she appears in the group picture, this is the first Mario Party game in which Birdo is not included on the box-art.

Birdo returns in Super Mario Party as a non-playable character. When the player talks to her, she says that she is excited about the party that already started. Birdo had given information to the player that the tournament had been held many times, they were called Mario Parties. She had mentioned that she joined in a few Mario Parties when she was younger, which is a reference to the previous games in the same series.

Birdo returns in Mario Party Superstars as a playable character. She is one of the individuals that Koopa Troopa invites to return to the locations of parties past.

Birdo makes a brief cameo in this game in the first level of World 4: Snow Rise. After Mario hits a tree in a certain area three times, she comes out while she sings a very short song while swinging. She also gives Mario the Goat Thing Sticker and isn't seen again after that.

Birdo looks very similar to a Yoshi. She has bright pink skin, a white belly, and red ridges on her back. She has four fingers and three toes on each hand and foot respectively. Her snout is shaped like a trumpet, for shooting her signature eggs. For accessories, she wears are a large red bow on the back of her head and a large diamond ring on her left hand.

In The Super Mario Bros. Super Show!, King Koopa's main weapon usually has Birdo as part of its name.

Birdo's gender has been debated throughout the series. According to the North American instruction manual of Super Mario Bros. 2: "[Birdo] thinks he is a girl and likes to be called Birdetta.". However, later versions of Super Mario Bros. 2 make no mention in either the manual or the video game itself. In Super Smash Bros. Brawl, Birdo's trophy description describes the character as "indeterminate gender", and uses the pronoun "it" rather than gender-specific pronouns such as "he" or "she". However, several other sources refer to Birdo as a female. The confusion surrounding Birdo's gender has also been addressed in a light-hearted matter, such as when Popple pauses before settling on calling Birdo a "dame" in Mario & Luigi: Superstar Saga. In Super Mario Advance though, the Birdos in that game had female voices. Currently, it is strongly implied that Birdo is biologically male, but identifies as female.

The confusion surrounding Birdo's gender has also been addressed in a light-hearted matter, such as when Popple pauses before settling on calling Birdo a "dame" in Mario & Luigi: Superstar Saga. In Paper Mario: Sticker Star, the first lyrics of Birdo's serenade allude to the gender confusion by saying, "Heart of a woman, heart of a man... Both can know of love's grace..."

Birdo's name is derived from Bird even though nothing really resembles a bird on her. The O might also reference their O-shaped snouts. The suffix o is also a masculine suffix in Latin. 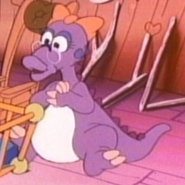 Cheepy’s mother. The only nice Birdo in the series.

The Thunderbirdo in The Toad Warrior.