MarioWiki
Register
Don't have an account?
Sign In
Advertisement
in: Locations, Locations in Super Mario 64, Levels,
and 2 more
English

Big Boo's Haunt is the fifth course in Super Mario 64 and Super Mario 64 DS, and is located in the Castle Courtyard. The course itself is a three-story mansion located in a small cage. To gain access to the level, the player must defeat the larger one of the Boos in the castle courtyard, then walk up to the small mansion in a cage that appears. Unlike most other courses, Big Boo's Haunt is one of the rare courses that is not accessed via a painting. Instead, Mario must travel to the castle's courtyard (after he has collected twelve Power Stars, fifteen in the DS remake) and defeat a Big Boo. The Boo will drop a small cage containing the course. Mario gets teleported to Big Boo's Haunt upon entering this cage.

Mario shrinks as he is entering the cage to Big Boo's Haunt. The level is bounded by what appears to be the bars of a cage, like the one in the entrance to the course, suggesting, along with his entrance into the level, that Mario has shrunk. The course's background is a night sky located in a dark forest.

Big Boo's Haunt is inhabited by none other than Big Boo himself. There is a small shack on the side of the mansion that has a lift to the basement. In the center of the basement is a large merry-go-round with many Boos and some Flamethrowers. There is also the Mad Piano (a piano that comes to life and tries to bite Mario if he gets too close), Bookends (books which emerge from the bookshelves and launch themselves at Mario), and Killer Chairs (chairs which levitate before attacking). Big Boo's Haunt is also home to Big Mr. I. There are two entrances into the main building: the front door immediately visible upon entering the level, and a single back door that leads into a room containing two Boos. This course is one of a few that contain bridges made of bricks that fall away when walked upon. Big Boo's Haunt is the only course that does not share a theme with another course. The music for the Merry-Go-Round is also used in the minigames Lakitu Launch, Bingo Ball, and Slots Shot. In the DS remake, the third floor also contains a painting to the Big Boo Battle which appears to be located on the tower (highest floor) of Big Boo's Haunt where King Boo resides. This place is also where Mario unlocks Luigi.

In Super Mario 64 DS, this is the only main course that Yoshi can't access at all; he can't defeat Boos in this game, nor can he successfully eat any.

The course features a large building and grounds, with three floors, an accessible balcony that leads to the roof, and a basement. A separate building found in the basement contains a speedy merry-go-round in the sewers. The boss, who is fought a number of times, is Big Boo.

In the DS remake, there is also a secret area, where you fight King Boo so that you can play as Luigi. It's accessible through the painting of Luigi in the third floor.

To complete this star Mario must enter a separate building near the mansion. Mario must go down the elevator, and go through the door at the end of the corridor. Once this is done, Mario must head through the nearest door. Inside is a big Merry Go Round. Six boos come out of the paintings one by one. Once the boos are defeated, the Big Boo appears. Once he is defeated, the Merry Go Round stops, and the star is revealed.

Star 3: Secret of the Haunted Books

To complete this star Mario must enter the mansion and climb the stairs to the top floor and enter the second door on the left. After entering the door, Mario must head down the corridor and punch the books in the correct order. Once this is done, the bookcase opens, and a secret platform with the star is revealed.

One all 8 Red Coins have been collected, the Star will appear on the second floor on the left balcony.

To complete this star, Mario must enter the mansion and head up to the upper floor and enter the second door to the right. Once inside Mario must wall-jump off one of walls and reach a door on the third floor (in Super Mario 64 DS, Mario can also use the power flower to get there). Mario must then enter the door on the third floor. On the other side of the door is a balcony with Big Boo on it. Once Mario defeats Big Boo the star is revealed on the roof of the mansion. In the DS remake, Luigi can use his backflip to reach the roof much easier.

Star 6: Eye to Eye in the Secret Room

In the DS remake, to complete this star, enter the stage as Luigi, enter the second door to the right in the upper floor and hit the ? block in that room to get the power flower (instead of the vanish cap). 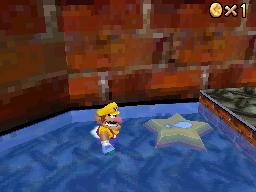 Enter the course as Wario and immediately run into the small cabin to the left (not the main house). Take the elevator down to the basement level and wade through the halls of water until you go through a doorway. You'll find a large black-brick block in the basement that Wario can ground pound to crush—hit the star switch underneath and very quickly run around to the other side of the basement to grab the star.

However, there's a problem: Wario is slow. Before you hit the switch, run to the other side of the basement to grab the Mario cap from under the water (you can see it on your map). Now that you've transformed to Mario, step on the switch again and quickly run to the star. Mario's much faster than Wario, making it pretty easy to get the golden power star.

Simply collect 100 coins from the stage. Most of the enemies in the stage release Blue Coins, making this task much easier. The Blue Coin switch allows for a further twenty to be collected, and the eight Red Coins should take the player near the 100 mark.