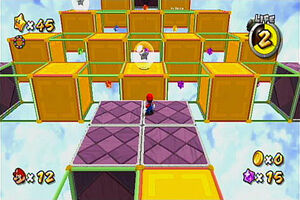 Beat Blocks are a rare type of block found in Super Mario Galaxy 2, Super Mario 3D Land, Super Mario 3D World and Captain Toad Treasure Tracker. They are recognized for alternating between solid blocks and immaterial outlines of various colors to the beat of in-game music. Because of this, Beat Blocks function as both platforms that Mario or Luigi safely can stand on when solid, or as life-taking pitfalls in their "vanished" state. Depending on the game, both the physical appearance and functions of Beat Blocks differ.

Beat Blocks make their debut in Super Mario Galaxy 2, appearing exclusively in the Beat Block Galaxy. In this appearance, all Beat Blocks are cube-shaped, and alternate between yellow and green. Mario or Luigi must traverse this galaxy, which is made up almost entirely of Beat Blocks, with caution and good timing. When the effects of the Double Time Comet arrive, the Star mission "Silver Stars in Double Time" causes the Beat Blocks to alternate at four times their regular speed (despite the mission's name). The Beat Blocks freeze when the mission is completed. The Beat Blocks's theme is used for other galaxies, such as the Upside Dizzy Galaxy, the Flipsville Galaxy (within Flipsville's new digs area (underground)), and the Flash Black Galaxy (whose Romp Comet's theme is overridden by the Beat Block music). 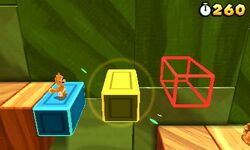 Beat Blocks return in Super Mario 3D Land. In this appearance, Beat Blocks come in an assortment of shapes, and are now red, yellow and blue. In World 6-4 and Special 7-2, all three colors will appear one-by-one, then vanish in the same manner, leaving periods where all or none of the Beat Blocks will appear solid. However, in Special 3-5, the blocks alternate between one color each time. Special 7-2's Beat Block theme also replaces the Cosmic Mario theme even though there are Cosmic Clones.

Beat Blocks return in Super Mario 3D World as they appeared in Super Mario Galaxy 2, but with the name Beep Blocks. They alternate between blue and peach-colored blocks. Their first appearance is in Beep Block Skyway, while their faster variant appears in Blast Block Skyway. Later levels also include Beat Blocks in double time. Interestingly, the double time Beat Blocks also appear in levels where the song has different BPM, but they still alternate in the beat of the original song's BPM.

In this the level is called Beep Block sky plaza where the player has to AVOID the fire balls from the fire bros. This level is the same type of level from Super Mario 3D world but the solid blocks that stay solid throughout the level have a different texture.

Retrieved from "https://mario.fandom.com/wiki/Beat_Block?oldid=266469"
Community content is available under CC-BY-SA unless otherwise noted.