Beanstalks (also called Magic Vines or simply Vines) are climbable plant ladders that appear in the Mario series. First appearing in Super Mario Bros., these vines are usually found inside Question Blocks. When the vine is released, it will grow vertically. The player can climb up the vine, and these beanstalks usually lead to alternate paths, hidden areas, or secrets. If you ground-pound it the vine will grow down, thus making the secret path or power-up impossible to get to. 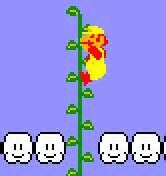 The beanstalk in Super Mario Bros.

The Beanstalks in Super Mario Bros. 2 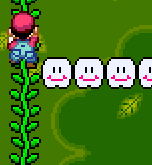 The beanstalk in Super Mario World
Add a photo to this gallery
Retrieved from "https://mario.fandom.com/wiki/Beanstalk?oldid=321279"
Community content is available under CC-BY-SA unless otherwise noted.