Banzai Bills are recurring enemies in the Mario series. They are an extremely large variety of Bullet Bills that first appeared in Super Mario World. Although they seem difficult to defeat, they can be defeated simply by jumping on it.

Banzai Bills also appear in the game Super Smash Bros. Melee. They are one of the hazards for the Princess Peach's Castle stage. These hazards are common in the Castle stage and inflict damage on contact. They appear from the east or west side of the stage and plunge onto the castle, creating a large explosion. If a character gets caught in the explosion, massive damage will be inflicted on him/her and he/she will be KO'd without a way to recover. However, Banzai Bills can be easily avoided.

They reappear in New Super Mario Bros., where they have a purplish tint to them, and are shot by Banzai Bill Blasters and travel very slowly, instead of coming from an unknown source as in Super Mario World and traveling quite fast.

They also appear in Super Princess Peach, introducing with it a red, more dangerous version, the Mad Banzai Bill.

In New Super Mario Bros. Wii, they appear mainly in World 7. They can home in on Mario in one level in World 9.

In The Legend of Zelda: Twilight Princess, the cannon operater Fyer has a Banzai Bill sewn on his sleeve.

In Mario Kart 7, Banzai Bills are shot randomly out of the cannon instead of Bullet Bills in Airship Fortress. 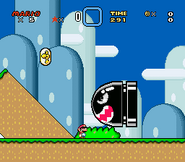 A Banzai Bill in Yoshi's Island 1 from Super Mario World.

Bowser holding a Banzai Bill in Mario & Luigi: Bowser's Inside Story.
Add a photo to this gallery
Retrieved from "https://mario.fandom.com/wiki/Banzai_Bill?oldid=100239"
Community content is available under CC-BY-SA unless otherwise noted.