With an outfit based on Rosalina's design, Baby Rosalina has pale skin, platinum blonde hair, rosy cheeks, and bright blue eyes with four eyelashes (unlike her adult counterpart, which has six). Her hair is similar to the way Rosalina droops a large bang over her right eye as an adult. Her dress appears to be turquoise with a lighter skirt section. Just like Rosalina, she wears a silver crown instead of the gold crown that Princess Peach and Princess Daisy wear. She has a pacifier like Baby Peach and Baby Daisy.

Like Baby Daisy, Pink Gold Peach and Toadette, Baby Rosalina first appears in a Mario Kart game. She is a light-class racer but has the stats of feather racers, including baby characters and Lemmy Koopa. Her only rival is Toadette.

Baby Rosalina is depicted quite like her adult counterpart. Like Rosalina, she has a more mysterious air about her. She is quieter than most of the other babies and normally acts calm, even when excited. Baby Rosalina's emblem is a Grand Star inside teal bonnet frills.

Baby Rosalina reappears in Mario Kart Tour as a Common character, being very easy to unlock. Her special item is the Boomerang Flower. There is also a detective version of her and she had an own tour, the Baby Rosalina Tour. 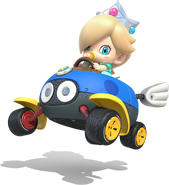 Retrieved from "https://mario.fandom.com/wiki/Baby_Rosalina?oldid=313126"
Community content is available under CC-BY-SA unless otherwise noted.