MarioWiki
Register
Don't have an account?
Sign In
Advertisement
in: Characters, Pages with section stubs, Babies,
and 9 more
English

Human
Baby Daisy is a character in the Mario series. She is the younger version of Princess Daisy and considered to be a light character. She is one of the seven baby characters in the series, the others being Baby Mario, Baby Luigi, Baby Peach, Baby Rosalina, Baby Wario, and Baby Donkey Kong.

Baby Daisy dresses in her adult counterpart's traditional orange and yellow color scheme, but instead of wearing a long, flowing dress, she wears a poofy-sleeved shirt adorned with white petal-like frills at the neckline, a green flower brooch at the front lined with white petals, and orange layered frills lining the bottom. On her lower body, she wears light yellow bloomers, white stockings, and orange Mary Janes with light brown soles. She wears the same crown as Daisy, and in addition, she sucks on a golden pacifier.

Baby Daisy first appeared as a playable character in Mario Kart Wii as an unlockable character. She can be unlocked by obtaining at least one Star Rank or better for all 50cc Wii Cups. She was casted by a Normal Staff Ghost, Nin*YuNya, and Expert Staff, Nin*Tkym. Baby Daisy is also one of the fastest lightweights in the game along with Baby Luigi.

Baby Daisy was playable for a second time in Mario Super Sluggers as an unlockable character. She will become playable when the player has Baby Daisy join Mario's team in Challenge mode at Peach Ice Gardens. 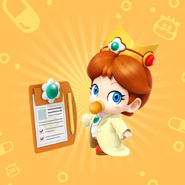