Defeat Luigi
Amadeus Wolfgeist is a boss appearing in Luigi's Mansion 3. He makes his lair on the Great Stage, which is on the Last Resort Hotel's fourth floor. Luigi fights him for the sixth floor's elevator button during his journey through the hotel. He has 450HP.

Amadeus is an elegantly dressed ghost bearing an appearance to that of a normal pianist. He has silver, almost gray hair that is mostly straight except for the back of his hair. His hair bursts into flames when his anger is encited, an example being during the cutscene that plays during his final phase which has him possess the piano he was playing.

Though he likes playing his piano, this character appears rather irritated when Luigi makes his way into the Great Stage. However, Amadeus treats his battle as part of his performance, until Luigi pushes him over the edge by sucking up the Twirling Goobs.

Amadeus Wolfgeist seems to be able to possess things. While he was in his first phase, the chairs were ripped from their seats. Amadeus then directed the chairs into Luigi. During his final phase, Amadeus can possess his piano. This turns him into a Mad Piano.

Amadeus Wolfgeist was a great piano player before his death. His spirit haunted the Last Resort hotel, posing as his former self. When King Boo took over the hotel, Amadeus found his alignment swaying to evil. Eventually, Luigi cornered and fought him within the Great Stage, capturing him on Professor Elvin Gadd's request.

When Luigi makes his entrance, Amadeus Wolfgeist is busy playing the piano.

During his first phase, Amadeus does not directly fight. Instead, he continues playing the piano. However, the seats will be torn from their foundation and attempt to fly towards Luigi's direction. Luigi can avoid the chairs by constantly running.

During his second phase, Amadeus summons five Twirling Goobs. They have 100 hit points just like their normal counterparts. However, their masks protect themselvese from Strobulb's flashing, so Luigi has to knock their masks with his Poltergust G-00 before sucking them in. After sucking them in, Amadeus gets mad and the battle gets into phase three.

During his final phase, Amadeus possesses his piano, becoming a Mad Piano. His main attack during this phase involves him slamming down hard on Luigi to crush him. This deals decent damage, but Amadeus will reveal himself. Once he is flashed, he will retreat to the grand stage. He will fire bombs from his mouth. These bombs will flash red before their detonation. Luigi must grab a bomb with his vacuum and fire a bomb at the boss's mouth to stun him, then slam him and render him vulernable. Amadeus Wolfgeist has 450 hit points in combat. Once defeated, the boss will take a bow before being sucked in.

Hence the name, the character is based off Wolfgang Amadeus Mozart, a famous composer in Austria.

Amadeus Wolfgeist is a reversal of Wolfgang Amadeus. 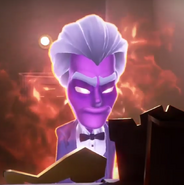 Amadeus Wolfgeist after turning into a mad piano.
Add a photo to this gallery
Retrieved from "https://mario.fandom.com/wiki/Amadeus_Wolfgeist?oldid=293717"
Community content is available under CC-BY-SA unless otherwise noted.