Throwing down Bob-ombs at players.

Albatoss is a bird enemy in Super Mario Bros. 2 whose name is a pun on Albatross referring to attacking with Bob-ombs.

Albatosses first appear in Super Mario Bros. 2 and throw Bob-ombs at the player and were forced by Wart to be one of his minions and trained them on Bob-ombs. Albatosses can be defeated by either throwing vegetables at them or running into them when in a Starman form. When they swoop down low enough, the player can jump onto Albatoss and ride it. The player is also required to complete World 6-2 by riding an Albatoss. Unlike many other enemies in the game, Albatosses cannot be picked up and thrown.

Though not a major appearance, the king of Sky Land turned into an Albatoss in the Super Mario Bros. 3 remakes. He just turns into a vulture in the Nintendo Entertainment System version.

Albatosses make a few appearances in the show, when King Koopa orders them to throw Bob-Ombs. 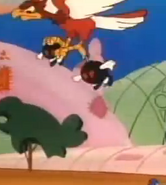 Add a photo to this gallery
Retrieved from "https://mario.fandom.com/wiki/Albatoss?oldid=266798"
Community content is available under CC-BY-SA unless otherwise noted.